Leopold longs for an adventurous life in Canada

He fought for his dream for more than 20 years

In the course of 20 years, Leopold Lybeer worked as a railway builder and herdsman in Canada. The financial crisis and his wife's nostalgia ended his Canadian adventure. Leopold would never forget the pristine landscape of Canada.

Leopold Lybeer was an adventurer. In 1911, he left for Canada with his brother and cousin. His wife and child remained in Belgium. Working on the railways in the undeveloped west was hard work. Bears were dangerous, living conditions difficult and food was scarce. Leopold and his brother gave up. Their cousin remained, but was killed in an explosion only months later.

In 1914 Leopold was back in Canada. This time with his wife, but without his daughter. In 1920, the family was reunited, but the happiness was short-lived. Leopold's wife died three years later.

Leopold searched for a new wife in Belgium. He married Joanna, and had a son, Frank. They lead a stable life and ran a business in Heist aan Zee. But he still dreamed of Canada. In 1926, he kissed his wife goodbye and left to herd cattle on the other side of the ocean.

Joanna and Frank arrived in 1931. The economic crisis and Joanna's nostalgia put an end to Leopold's adventurous life. He would never forget Canada. His son Frank especially remembers the band that played on the return trip on the Red Star Line ship. 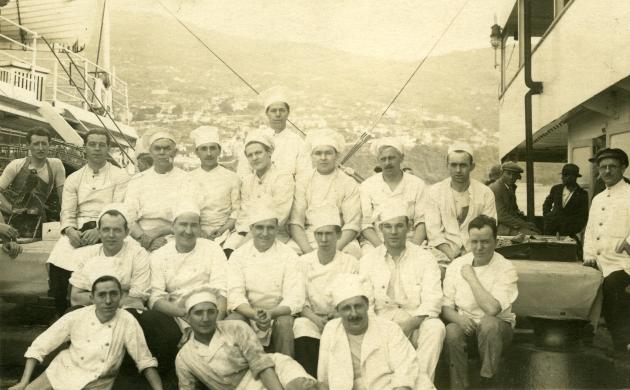 Stories from passengers and crew

Scroll through the photo albums and diary's from passengers and crew members.