In 1890, the painter Louis van Engelen depicted a crowd of Belgian emigrants moving across Antwerp’s Nassau Bridge to the district of Het Eilandje towards a ship. The resident population watches them pass by.

Belgians too were among those who sought a new future on the other side of the ocean. However, Belgians were only a small portion of the Red Star Line’s passengers. Between 1871 and 1930, some 137,000 emigrated to the United States. Most did this from Antwerp, although the ports of Rotterdam and Le Havre were also popular.

In the United States they ended up chiefly in the Great Lakes region (Michigan, Wisconsin and Illinois) and in the Midwest. From the end of the nineteenth century onwards, increasing numbers of Belgians began to choose Canada as their destination country. The image of Canada as a wealthy country with many opportunities for migrants persisted for virtually the whole of the twentieth century.

All things considered, Belgian emigration to countries outside of Europe was relatively limited. Population growth and rapid industrial growth were also in Belgium the cause of knock-on problems, but the majority of people chose to try their luck in Wallonia or Northern France. 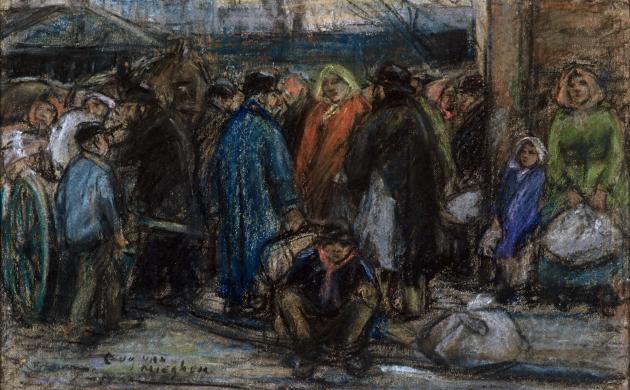 Eugeen Van Mieghem is an Antwerp realist artist. He grows up in his parents’ café, right across the entrance of the Red Star Line sheds in the Montevideostraat.