The world has always entered Antwerp via the Scheldt River. Part of the world left the metropolis via the Eilandje. The Eilandje is the oldest harbour area in Antwerp. The Red Star Line was responsible for quite a bit of activity in the harbour for more than half a century. When it disappeared and the harbour moved to the hinterland, things became quiet on the Eilandje. But now it is booming once again!

Traces of the Red Star Line

The Red Star Line was active on 'het Eilandje' in Antwerp’s harbour for more than half a century. The ships moored on the quay just before the bend in the Scheldt. This is quite far from the city centre, but that was for safety reasons. The shipping company initially planned on transporting oil too. Even though those plans were never realised, the location was not altered. The departure point remained the large bollards just before the bend in the Scheldt.

A departure was planned weekly, usually on Saturdays. On such moments, passengers bustled towards the Rijnkaai. There were up to 2500 passengers per ship. Third-class passengers had to pass through administrative and medical examinations first. First-class and second-class passengers were allowed to board without an examination. It was extremely busy; in addition to passengers, family and friends gathered on the quay to wave their friends and family goodbye and people who wanted to see the giant ships with their own eyes. All that activity left traces in the city, especially on 'het Eilandje'.

The bolders of the Red Star Line

The Belgenland II, the flagship of the Red Star Line, moored in Antwerp for the first time in 1923. At that time the Belgenland II was the largest ship that ever moored on a quay in Antwerp. When the ship first arrived in Antwerp, it created a real commotion. Extra-large mooring posts had to be installed so that the ship could maneuver and moor. The bolders are still there.

The offices of the Red Star Line moved to different locations in the city throughout the course of its existence. For a while they were in the Kammenstraat, later on the Jordaenskaai and then they were located at Rijnkaai 21, near the Red Star Line sheds. That is currently a beautifully renovated apartment building. The façade still displays the letters SANBA, Société Anonyme de Navigation Belgo-Américaine. At the back of the building, in the Braziliëstraat, there are two coats of arms on the façade (of Belgium and of America) that reveal the trans-Atlantic activity of the shipping company.

The Loodswezen is a less well-known place in Antwerp. It is marked by a statue that commemorates perished sailors. Passing ships blow their horns as a homage to the sailors who perished in the war. This is a special place for the Red Star Line for a different reason: Eugeen Venesoen had his office here. Venesoen was Belgian Commissioner for Emigration from 1891 to 1924.

The café of Van Mieghem

Antwerp painter Eugeen Van Mieghem was a privileged eyewitness of everything that occurred around the Red Star Line sheds. His mother ran a café across the street. Eugeen Van Mieghem was fascinated by the comings and goings of the emigrants. At that time photography was still in its infancy, so his hundreds of sketches and drawings related to harbour life are an important time document. The café disappeared a long time ago, but if you look closely at the bit of wasteland where the café once stood, you might find a trace of it. Where the café once stood are still a few remains on the wall of a wasteland.

Together with De Shop and the Montevideo warehouse, the Red Star Line site is one of the eye-catchers in the new Montevideo neighbourhood on 'het Eilandje'.

The Red Star Line site is located in the Montevideo neighbourhood, in the heart of the old port area called 'het Eilandje'. A serie of ambitious urban renewal projects has led lots of commerical and cultural activties on'het Eilandje'.

The public space around the oldest docks was given a new lease on life. The renovated Felixpakhuis (Felix Repository) houses the city’s archives since 2008 and the Museum aan de Stroom (MAS) gives the old port area a striking new urban beacon.

The renovated Red Star Line site is one of the eye-catchers in the Montevideo neighbourhood, in addition to the renovated De Shop and Montevideo warehouses and the redesigned Limaplein. 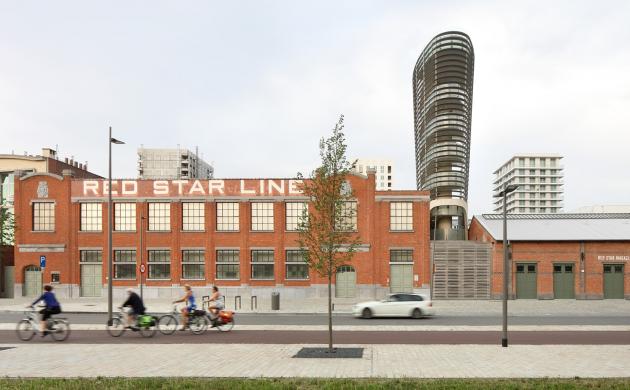 The historic buildings of the shipping company were carefully restored. A new tower was added.