The adventure of Irène Bobelijn

The stories of both the Bobelijn family and the trunk symbolise the journey millions of Europeans made to the USA.

IRÈNE BOBELIJN
Born in 1922(?)
Travelled to New York on the SS Lapland in 1928
Returned to Belgium on the SS Pennland in 1931
Item in the museum’s collection: SUITCASE 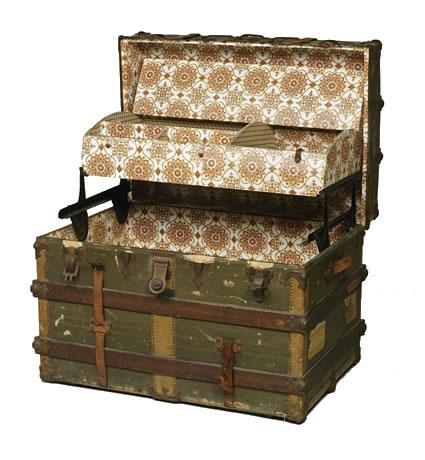 Irène Bobelijn’s life began adventurously. While she grew up with her grandparents in Sint-Amandsberg, her father and mother worked in Moline, Illinois in a factory that manufactured agricultural machines. Life was good in America and Irene’s parents wanted their daughter to be with them. The time was ripe in 1928. In Antwerp, six-year-old Irène, (her suitcase) and her governess boarded the SS Lapland and sailed to New York.

Life on board was one big adventure for little Irène. As a second-class passenger she had a lot of freedom to move around the ship. She noticed that ‘those who are in the hold are not allowed to come out’. However, the third-class children were allowed to attend the Christmas party. After the long voyage and a second-class train journey, Irène’s parents were able to embrace her.

Irène enjoyed America tremendously. Life was more colourful and more luxurious than in Belgium. She lived in a house with a refrigerator and central heating. She was very impressed by the skyscrapers. For a small girl, the food was also more delicious than in Flanders. She feasted on popcorn, Coca-Cola and hotdogs. The fairytale did not last very long. In 1931, when the Great Depression became too much for them, the Bobelijn family (and the suitcase) boarded the SS Pennland and returned to Flanders, to a farmstead in Assenede. Irène never forgot her stay in the United States.

Help writing the story of the museum

Do you have a story that is related to the history of the Red Star Line, a Red Star Line passenger, or to past or contemporary migration? We want to hear it!